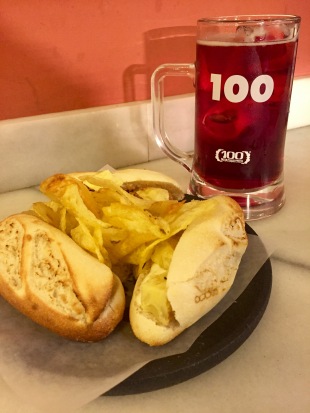 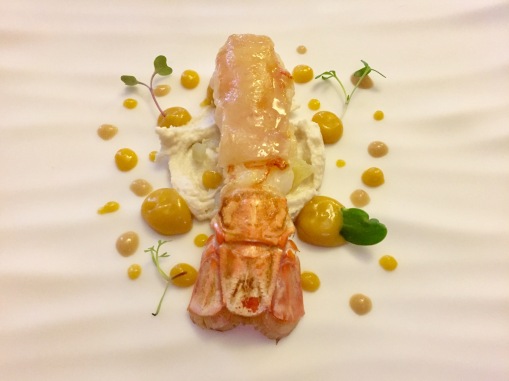 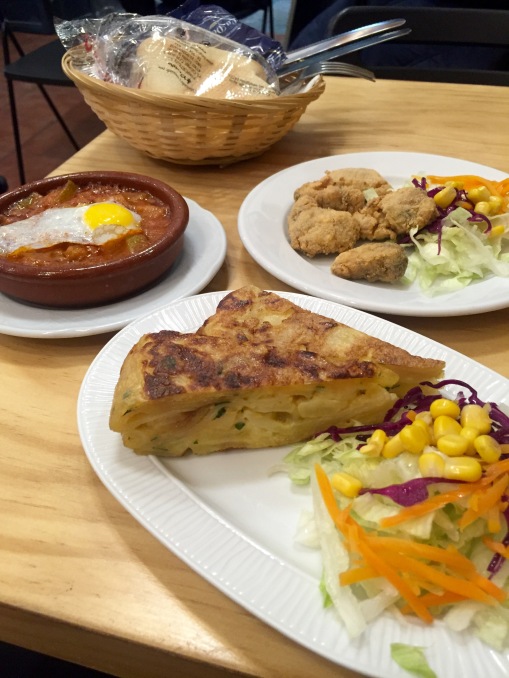 Dictionary.com defines tapas as “small Spanish savory dishes, typically served with drinks at a bar.” And while I by no means disagree with this definition, I define “tapas” as simply the best (and only?!) way to eat.

Sevilla has such incredible tapas, especially if you love seafood, and of course, olive oil! One of the best parts about the city is that every winding, cobblestone street of the old town is filled with bars and restaurants serving delectable tapas at all hours. And while you really can’t go wrong, I have a couple of favorite spots if you find yourself wandering around Barrio Santa Cruz in search of some great tapas.

La Freiduría Puerta de La Carne (Calle Santa María la Blanca, 36)
If you’re a fried seafood fan, this place is a MUST! The choco is always a crowd pleaser, but my personal favorite is the adobo. Adobo itself is a rub, but in Sevilla, they use the term to describe the entire dish. It’s typically made with either dogfish or monkfish, and you order by the kilo, so grab some friends, a cone of adobo (it’s served in a paper cone – I never said it was fancy, folks!), some cañas of beer, and take a walk through the nearby park!

Levies (Calle San Jose, 15)
This was one of the first places I ate when I first visited Sevilla ten years ago. They have a large space next door with outdoor seating, so it’s the perfect place to grab a bite on a sunny day. My favorites are the espinacas con garbonzos (spinach and garbonzo beans – it’s a typical dish in Sevilla, and way better than it sounds or looks, I promise!) and any of the croquetas,  especially the cheese or bacalao (cod) fritters. Also the gambas al ajillo (shrimp in garlic and butter) is to die for, and you should order it everywhere if you like shrimp, garlic, and butter.

Bodega Santa Cruz – Las Columnas (Calle Rodrigo Caro, 1A)
Situated on the corner of Calles Mateos Gago and Rodrigo Caro is this lovely (and always lively!) gem. They serve up a great selection of montaditos and tapas – try the Ensaladilla Rusa (disclaimer: it’s made with mayo!), berenjena con miel (eggplant with honey), and the gazpacho. Since it’s in such a prime location, it’s usually packed, but try to snag one of the tables outside, too!

Taberna Coloniales (Calle Fernández y González, 36)
Just across the metro line from the Cathedral, Taberna Coloniales has one of the most extensive tapas menus in the city! The first floor is the bar area, and the second floor is a more sit-down restaurant type of feel. The bar gets pretty poppin’ so be prepared to have people all around you. Try the croquetas de bacalao (cod fritters) and salmorejo (the greatest dish on earth…it’s the andalusian version of gazpacho, but without all the extra veggies. Think tomato soup, but with more garlic, and then usually it has a hard-boiled egg, queso fresco, and either ham or tuna on top). This would also be the place to get paella, though you can get good paella most anywhere in Sevilla.

Cien Montaditos (multiple locations)
I usually shy away from chains, but when there are 100 sandwiches to choose from, most of them costing 1-1.5 euro each, I’m not about to say no! If you’re going with friends, try one of the sampler platters. If you’re going alone, I’d recommend 3 montaditos, and grab some Tinto de Verano while you’re at it! My personal favorites are anything with Tortilla Española (Spanish Omelette), gambas con ali oli (shrimp and aioli),   and the atun con cebolla y lechuga (tuna with fried onions and lettuce)
note: Tinto de Verano is a popular summer drink in southern Spain, but they’ll serve it to you any time of year if you just ask. Essentially a lighter version of sangria (which is typically made with brandy), Tinto de Verano is a mix of red wine and fanta, usually lemon or orange. I’d recommend lemon!

Abantal (Calle Alcalde José de la Bandera, 7)
And if you’re in the mood for something extra special, my favorite fine dining spot is the one Michelin-starred Abantal.  The tasting is absolute heaven, with flavors and ingredients unique to the surrounding region.

**Note on timing: breakfast in Sevilla is done by 10. Don’t worry, you can order coffee and tortilla all day, but most places will stop serving things like pan con tomate by 10. Lunch is the biggest meal of the day in Spain, usually starting between 13-13:30 and lasting for hours. Conveniently, it leads right into siesta time, hence why a lot of shops close between 14:00-17:00. You can get tapas all day, but the socially acceptable dinner time is around 22:00. You may get some stares if you start ordering tapas upon tapas at 18:30 – consider yourself warned!

**Note on portions: tapas are the smallest portion of food offered at restaurants and really allow you to try a variety of options without over-eating or over-spending. If you’re looking for a larger helping but still want to try multiple things, choose the “racion” option. It’s usually around american appetizer size, so still totally sharable!